Children’s picture must be in the center of more attention of education, culture and family. Art image is the material for scientific research, especially valuable in understanding the stages of children’s development.

That is why I have been collecting children’s art masterpieces for decades and for this purpose I founded the first children’s art gallery in Lviv. Also I arranged Forum of Children’s Art “Golden Easel” where children can be participants of different festivals, competitions, plein airs, traveling exhibitions every year. 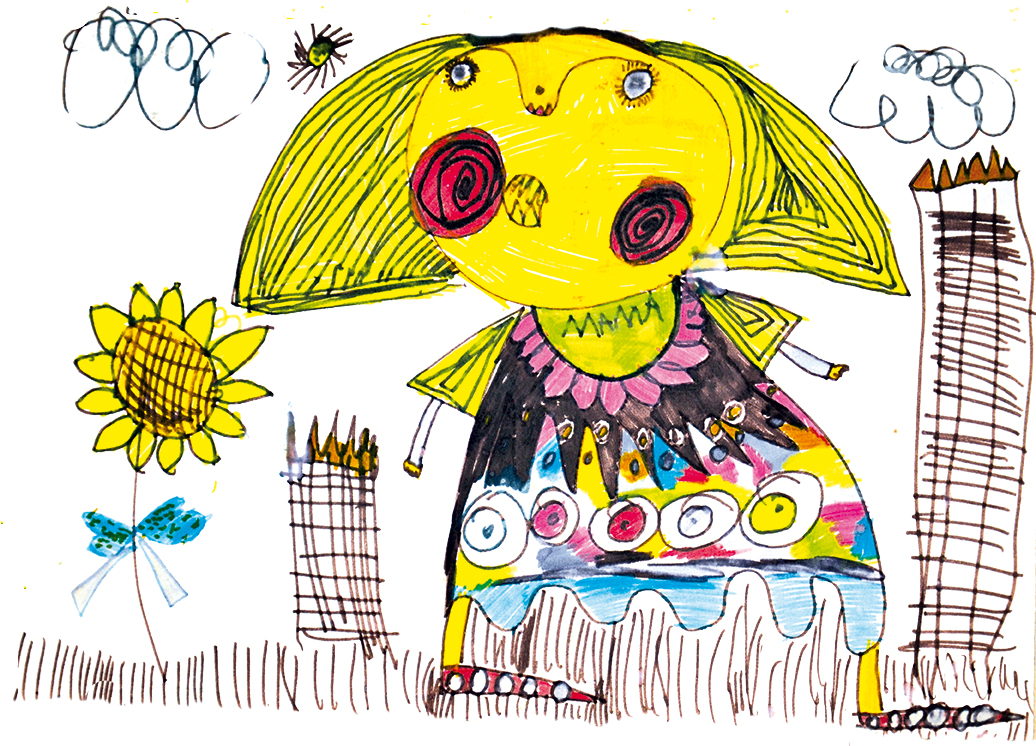 Who we are?
Charitable Foundation “Lviv Children’s Gallery” was founded in 2003. The main aim is to develop the talents of young people, including children with special needs.

Transparency of activity
You can see all the activities of the Charitable Foundation “Lviv Children’s Gallery” on https://artclass.lviv.ua/en 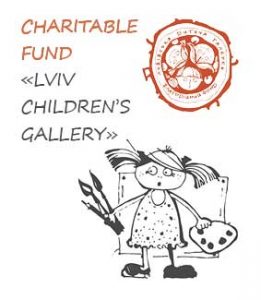 Charitable Foundation “Lviv Children’s Gallery” was founded in 31 March 2003 by Olha Mykhailiuk (Soronovych). The aim of the organization is realization of charitable activity and practical implementation of international, national, regional and local programs. This project is directed to supporting talented young people and youth groups. Moreover, important point is realization cultural programs and revival national cultural heritage and fortitude.

The Foundation manages constantly working children’s gallery, organizes personal and collective exhibitions in Ukraine and abroad. Furthermore, it popularizes creative achievements of talented children in the pages of magazine “Artclass”. The Foundation promotes the development of the creative potential of young people through art, testing, innovative programs, training courses for educators, scientific seminars, festivals etc. A lot of experienced specialists in the fields of education, science and culture join the cooperation.

Journal “Artclass” was created in 2004. It based on Foundation and popularizes work of talented children and professional artists, supports the creation of unique editions. These publications reflect the results of research and humanity achievements in art, science, education. “Artclass” was awarded twice at the state level as the best periodical edition for children and young people in Ukraine (2006, 2007).

The purpose of International Children’s Art Forum “Golden Easel: Moses of Ukrainian Spirit traces” is development of children’s creative abilities by spiritual, ecumenical and art means throughout a year. During summer holidays children can go to health camp in Pidliutyi (Carpathians). In 20’s of the twentieth century metropolitan Andrey Sheptytsky organized such camps for orphans and students of Oleksa Novakivsky school.

Participants of previous festivals and competitions were children and youth from 3 to 18 years old from different cities and settlements of Ukraine, Poland, Belarus, Russia, France, Germany, USA, Burkina Faso (Africa) and UK.

During 2003-2016, The Foundation organized dozens of personal and collective exhibitions in Ukraine, Poland and Belarus. There are thousands of children’s masterpieces in The Foundation archives. Paintings were created on open-airs in different techniques.

According to the results of festivals and competitions for the period of 2003-2016, 15 finals of the International children’s plein air competition “Golden Easel” were held at the National Museum of Andrey Sheptytsky in Lviv. The winners received gold medals and the Grand Prix – a gold easel with a diamond. Famous artists from Ukraine, Russia and Poland were jury members.

Dozens of children, youth and professional artists charity exhibitions were opened on the basis of the Lviv Children’s Gallery in Soborna avenue 17/2. Mobile and personal exhibitions were opened annually in Lviv, Kiev and the participating cities museums. Among them there was the exhibition of a talented young artist Anna Batte from Warka (Poland) in Soborna avenue 17 in Lviv. Also, Olha Mykhailiuk presented Marta Overchuk’s art works. Marta is 12 years old and lives in Lviv, Ukraine. The exhibition took place in the museum of G. Senkevich (2006) at the 52nd International Book Fair. Marta Overchuk, a participant of the International Competition “Golden Easel”, illustrated the children’s novel “In desert and forest” by G. Senkevich. The book was awarded as the best edition for children in Ukraine in 2008. From 2008 to 2014, the final mobile exhibitions of “Golden Easel” were held every year at the Ukrainian Museum of Book and Printing (Kyiv). One of the most striking was the personal exhibition of illustrations by Kseniya Stepans to Fiddler’s book “Canada which smells like galipot”.

On the basis of Charitable foundation “Lviv Children’s Gallery”, international and all-Ukrainian conferences, scientific and practical workshops on artistic education issues are held annually for heads of delegations and successful art teachers.

As a result, several dozen of video films about the activity of the Forum, children’s creativity, Ukrainian visual arts, methods of teaching artistic and aesthetic disciplines were created.

The Foundation’s Board meeting were held in 2017. The founder of the Foundation Olha Mykhailiuk offered to elect Iryna Vachkova as a President of Charitable Foundation “Lviv Children’s Gallery”. Ms Vachkova is an experienced teacher, winner of the regional and national competitions “Teacher of the Year” in visual arts, art historian, teacher of Lviv Regional University of Postgraduate Pedagogical Education. She is also an active jury member of International plein air competition “Golden Easel”, the author of workshops, programs in visual arts, manuals for teachers of artistic and aesthetic disciplines, who were assigned by a Ministry of Education and Science of Ukraine seal. 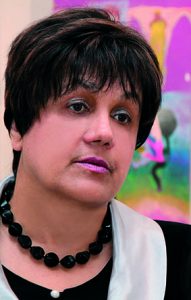 Olha Mykhailiuk (Soronovych) is an art historian and theorist, a pedagogue, a chief editor and founder of the journal “Artclass”, a publisher, an organizer of artistic life, a social and cultural figure, a senior lecturer in Lviv Regional University of Postgraduate Pedagogical Education, a teacher-methodologist, an excellent student of public education of Ukraine. Furthermore, she is an author and an organizer of many projects related to the development of children creative potential by means of art; author of a number of state educational programs and manuals for secondary schools in Ukraine, approved by a Ministry of Education and Science of Ukraine seal. Also, Ms Mykhailiuk is the author, compiler and designer of multi-volume “Moses of the Ukrainian Spirit” and the monograph “The universal figure of Metropolitan Andrey Sheptytsky”. She is the founder of the first Children’s Gallery in Lviv, on the basis of which were opened a lot of personal exhibitions for talented children in Ukraine and the world (there were systematic classes for children with disabilities). In addition, Ms Mykhailiuk is the founder and organizer of the annual International Forum of Children’s Art “Golden Easel: Footsteps of metropolitan Andrey Sheptytsky”. On this forum are awarded winners of the final of the International children’s plein air competition “Golden Easel: Footsteps of the Moses of the Ukrainian Spirit” and people who promote the development of children’s creative abilities by special award from the noble metal and diamond. Olha Mykhailiuk is an author of the volume-spatial composition “Tree of Life” from 100000 pysanok (8.50 meters high, 4.50 meters in diameter!) which was opened at the Lviv Palace of Arts. There was the pysanka festival “Tree of Life” at that time which was founded by Ms Mykhailiuk in 2000 too. Children’s puppet theater also was opened under her guidance in secondary school №32 in Lviv.

Since 1982 Olha Mykhailiuk has been collecting children’s works and dreams of opening Museum of Children’s Art in Lviv and Children’s Adaptation Development Center for Children with Special Needs (cerebral palsy).

1982–1996 – teacher-experimenter of new programs in visual art in Lviv schools №6, №32 (in this school Ms Mykhailiuk founded children’s puppet theater and staged two plays –“Cinderella” and “Forest song”; she was an author of artistic production, script and directing)

1996 – opening children’s gallery and creating the first author’s program in visual art for 5-7 grade students during Independence period, which was approved by a Ministry of Education and Science of Ukraine seal

2000 – senior lecturer in department of cultural education in LOIPPO

2000 – foundation of the All-Ukrainian Pysanka Festival “The Tree of Life” and creating volume-spatial composition from 100000 pysanok (8.50 meters high, 4.50 meters in diameter!) at the Lviv Palace of Arts

2006 – foundation of International children’s plein air competition “Golden Easel: Footsteps of metropolitan Andrey Sheptytsky” and the award – “Golden Easel”, made of the noble metal and diamond

2008 – the journal “Artclass”, founded by Olha Mykhailiuk, became a winner of the All-Ukrainian competition in a category “The Best Periodical Edition for Children and Youth”, organized by the State Committee for Television Broadcasting of Ukraine

2011 – foundation of Lviv Municipal Children’s Gallery www.artclass.lviv.ua. On the pages was opened a series of “Golden Easel” participants personal galleries

2009–2014 – preparation for printing scientific and methodological publications, among which dozens of scientific and methodological manuals for teachers of artistic and aesthetic disciplines, methodological recommendations and materials for studying the experience of advanced teachers, information and analytical materials, scientific articles about contemporary Ukrainian artists in the book “The Artists of Ukraine”. On the basis of the journal “Artclass” Ms Mykhailiuk began publishing a series of scientific manuals for the teachers of art: “Art as a means of knowledge and development”, “Architecture”, “Pedagogy of Visual Arts”. As of 2017 the following issues were published: 5 volumes of the series “Art culture of Ukraine”, 3 volumes of the series “Architecture”. Some of them were approved by a Ministry of Education and Science of Ukraine seal

2015–2017 – beginning of printing a series of books “Moses of the Ukrainian Spirit”. Three volumes of the series were published

Olha Mykhailiuk (Soronovych) decided to create an Art Gallery of children’s masterpieces in order to attract attention of education, culture and family to a unique phemomenon – the child’s imaginative thinking which manifests itself in visual creativity and is the most effective means of multi-faced child development, especially at the early age. This gallery was founded in lecture hall of Lviv Regional University of Postgraduate Pedagogical Education (LOIPPO). With this aim she uses the originals of students creative works, who studied at the visual arts lessons on her own method in the secondary school №32 (Lviv).

In 1996-97, Ms Mykhailiuk created unique dynamic compositions from the original works of her students on the walls of the lecture hall. In this way, she wanted to demonstrate to the educators the scientific value of the unique phenomenon — child’s thinking. She tried to immortalize the children’s vision of the world in the Art Gallery.

In the Art Gallery of LOIPPO lectures and practical classes were held at the courses of advanced training of visual arts teachers, heads of groups of artistic and aesthetic disciplines, psychologists, historians, philologists. Also there were presentations, seminars and conferences, round tables and Bohemian evenings. 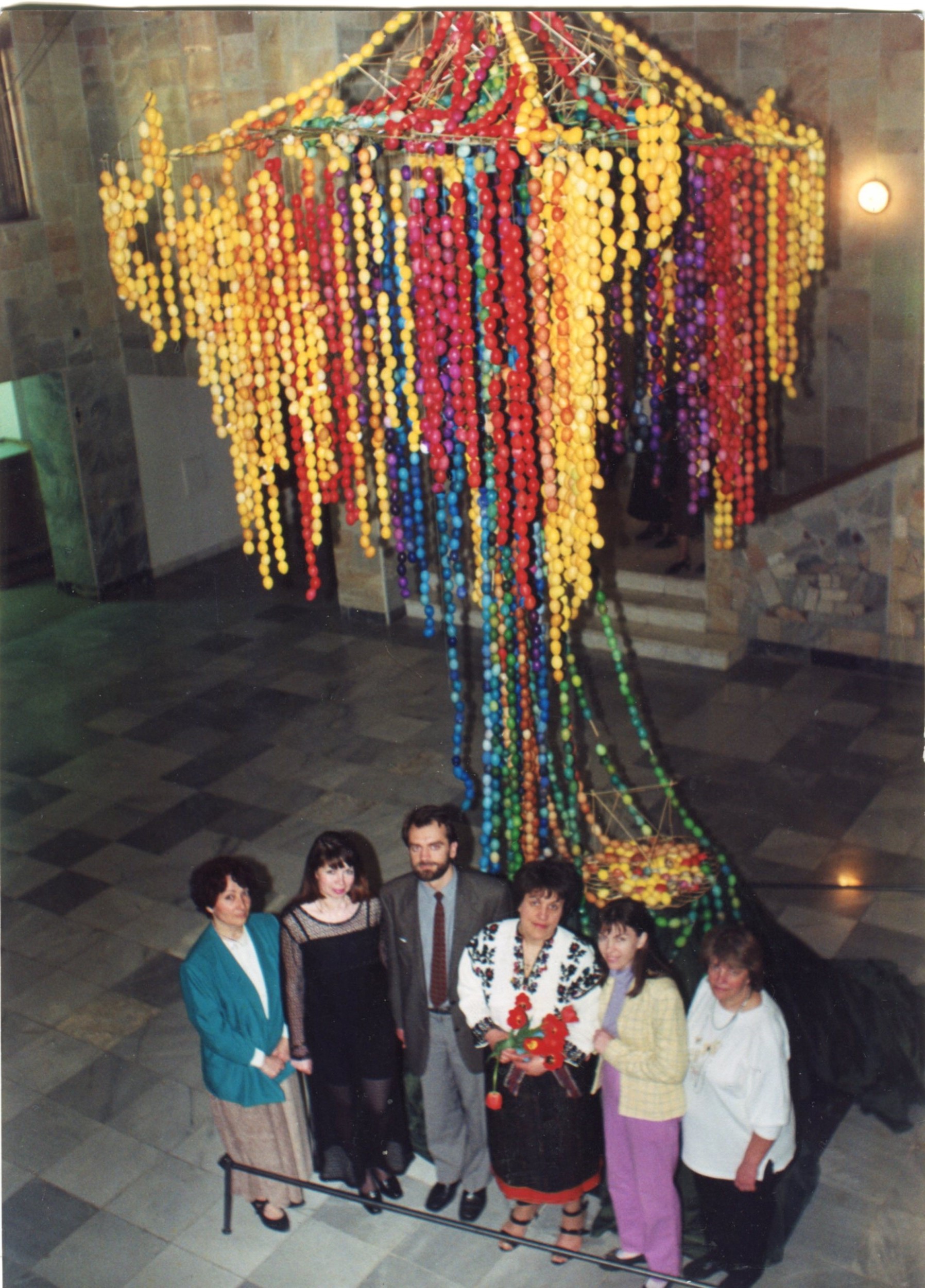